When I would tell people I went to Haiti, naturally they would ask “how was it?!” in the same way people ask “how are you?” and the answer is always “good, how are you?” But this is not a genuine answer but a formality we entertain, rather than a truthful reply to the question. I felt the pressure to reply the same way when I was asked about Haiti, I would say “oh it was an amazing experience” or “I was so fortunate to have the opportunity to go” but in reality if a person were to sit down and ask me, my response would be much different. Through conversation with my family I came to the conclusion that the word shocking was the most all-encompassing word to describe my experience.

Haiti shattered all my expectations in both positive and negative ways. But despite the positives, there are things that are simply incomprehensible until you witness them firsthand.  One such thing for me was the amount of trash. Being someone who loves nature and plans to major in environmental science in college, the amount of trash I saw everywhere was unreal…and when I mean everywhere, it was literally everywhere; piles of it outside St. Marc; piled in the streets, and piled in the ditches. This could easily make someone, especially someone like me angry, but instead, it made me realize the dire conditions of Haiti. I witnessed the concept that concern for the condition of the environment, our environmental footprint, and garbage disposal is a privilege. Haitians are consumed with surviving day to day.  Another aspect that was revealing, again relating to the environment was the lack of trees. This was something we had talked about prior to the trip-how Haitians cut trees down to turn into coal for energy, but again, seeing this in person was drastically different than just hearing about it. I remember on the hour and a half drive from Port au Prince Airport to St. Marc passing huge mountains, that were completely bare…I was speechless.  I remember thinking, this is wrong; every environment needs trees to function! I thought I was on a different planet.  Another shocking sight were the little makeshift houses built on the side of the mountains. “Houses” that were built out of anything they could find, scrap metal, screens woven from leaves, used as walls, and scraps of wood. 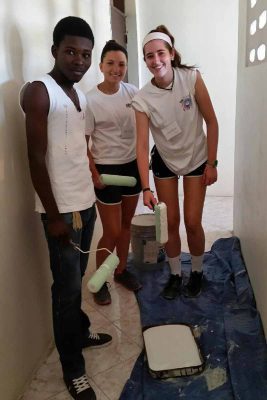 However, despite these seemingly unlivable circumstances, the people of Haiti were incredibly hospitable, joy-filled and welcoming. Probably one thing that never got old was the power of their completely genuine smiles.  A smile breaks down the numerous differences of culture, geographic location, economic status and language, and allows you to connect on the most basic and meaningful level; the human level.  While this might sound contrived, it is there that I saw the face of God.  In the simple smile and the ten second connections made with a complete stranger, I felt welcomed automatically; there was no judgement, just kindness. Also on Wednesday we went to a parish and there we experienced the values of the Haitian culture. We were served lunch, and I mean truly served, I have never been treated the way the priest accommodated us. The food we had was spectacular and seemingly never ending. As we were eating, the Priest would come back with another dish, and because he was serving us, he never even got the chance to eat. While this may seem extreme, all guests are treated this way, and it did not diminish our gratitude.

Reflecting back on the trip, what I remember the most is not the immense poverty, lack of running water, or a lacking waste management system, but instead the many positives from the Haitian people that I was not prepared for. The aspect of Haiti that I love to share the most is that they are not defined by their extreme poverty. I think we have a great deal to learn from their selfless hospitality as well as their incredible faith.  This changed my perspective on Haiti, and most importantly reminds me that regardless of the situation you may live in, we are all just people. This strong human connection left me thinking “How does anyone continue their normal life after such an overwhelming experience without questioning God’s plan for them?”